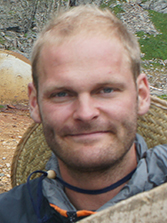 I am interested in combining notions from arts, science and philosophy. Specifically artificial intelligence, material computation and fabrication that all seem to meet in robotics. In 2008 I received my Master of Architecture at the Royal Academy of Fine Arts, School of Architecture, Copenhagen, with the project, ‘Metro Mechanics’. In the years 2008-2012 I worked both at the at the Danish architecture office COBE, and research Center for IT and Architecture (CITA). At CITA I explored computation, material properties in relation to fabrication, large scale CNC fabrication, rapid prototyping and robotic assembly.

Currently I am a Postdoc at the Computer Science Department at ITU, and part of the REAL. I currently designing and constructing the fabrication machines for Continuous Braided Filament Structures under the EU-funded project Flora Robotica.

For other projects visit www.stigantonnielsen.com