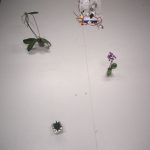 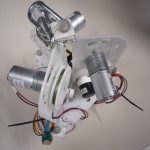 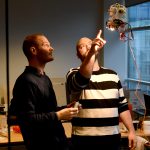 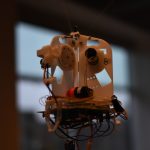 RUBE, the Robotic Urban Building Environment is a robotic platform, originally developed by Stig at Chalmers University. A new version is under development by Stig and David at the REAL Lab at ITU.

RUBE is a self-contained, three-wire hanging robot that pulls itself around a space using three winches. It is self-contained because the motors, power, and control systems all reside on the robot. This makes the setup process very quick as the only requirement is to hang the lines and measure their lengths.

The robot has a number of applications. It takes its name from its original conception as a replacement for the standard crane for urban infill construction. The idea would be to simply attach RUBE to three existing buildings and from there, it could traverse a construction site between them.

RUBE has also become part of the Robotic Agroecology project Evolving Species One, where it is serving as one of the first species of robot that is being evolved to inhabit an agroecological food system. It was used as part of the Beyond Digital: Towards Biological experiments (see below for video).