Immersive Materials: a material exploration of the relationship between humans and the environment

Working beyond the functionality-driven investigation of technology this thesis seeks to explore the mediating possibilities that new material- and technological combinations can offer within the fields of intelligent textiles and soft robotics by conducting a practise-based research on a conceptual level. The purpose of the conceptual research is to extend the artefact beyond the marketplace and consumer oriented focus, by investigating it in a broader context through speculative design thinking which challenges the relationship with objects in everyday life.

In recent years, both soft robotics and intelligent textiles have been two popular fields of innovation in which their respective technological functionalities are the subject for research. Soft robotics uses the natural medium air as a technology, opening up for the possibility to explore air as both a technical material as well as a subject for design in a conceptual context.

Archê is a wearable mediation of the surrounding air, which allows the aerial process caused by human respiration to emerge and dissolve. By mediating this process it immerses its wearer in the aerial fluxes created by the immediate surroundings. The project behind Archê was to investigate new materialities through a conceptual framework in which methods and technologies within intelligent textiles and soft robotics were explored.

This is why the process that Archê seeks to mediate is more poetic than it is purposeful for the market place by placing itself somewhere between fiction and reality. Speculating in developing an alternative relationship between humans and the aerial environment different from the contemporary, it seeks to represent the lost transparent nature of air by mediating barely perceptible formations.

Using the aerial methods of soft robotics to explore air as an technology as well as a subject for conceptual conduction, it opened up for a vast field across soft actuation, textile design, ancient philosophy, phenomenology and recent politics. While this vast span of research contributed to conduct this project beyond the functionality-driven investigation of technology, it also caused some of its limitations. Theoretically, more thorough insights within the conceptual literature would have been preferred to support the conceptual framework of the artefact in a greater extend. Opening up for the vast field of environmental perceptions, I was only able to scratch the surface within certain areas, which continually opened up for additional works.

I argue that Archê contributes to a holistic and probably even sustainable approach to the role and use of intelligent artefacts in everyday life. However, I chose during the process not to expand the conceptual research into the vast field of sustainability, but only to imply this through the work within air. I believe much more explorations can be done within sustainability and smart components in everyday life, which can be done not only on a conceptual level, but include the functionality-driven and problem solving aspect of product design.

At this stage the role of the prototype focus on the relationship it can establish between its wearer and the environment. The extent it succeeds to actually encourage this could be a subject for further research. While the conducted feedback session showed great potential in enhancing the experience of the immediate environment by using processes in the air together with the lifelike affordances of the Ecoflex, this aspect of the prototype should be investigated and refined further before implementing its final appearance.

Addressing air through anthropology, philosophy and science, our perception of it has changed several times throughout history. Respiration itself is fundamental to our existence, which embodies us in the environment through the boundary dissolving process of photosynthesis that continually induce the progress and movement of life. At the same time we are constantly surrounded by air in our environment, the human perception of air can therefore range from invisible even to non existing as we cannot see or interact with this ‘textureless void’ in other ways than through its mediating properties such as the wind and weather.

Furthermore, our contemporary lifestyle has displaced us from experiencing these processual formations of air with a Dane being indoor up to 90 per cent of the day, leaving us with the, still existing but, barely perceptible indoor formations. Exploring the possibility of developing intelligent technological artefacts for everyday life, this project seeks to re-immerse us in the aerial fluxes by enhancing our relationship with the environment through the development of a speculative design artefact.

Previously, robots were something made from rigid parts often metals or plastics, made to perform continuously tasks usually as a substitute to humans, making the human-robot interactions limited. Since the 1990’s and especially in recent years, soft robotics has become a largely investigated field of research. These kinds of new robots have much more freedom in their movements, due to their muscular construction and often biological inspired systems. The bio-inspired type of construction creates lifelike movements allowing them to potentially “interact with people in a soft way with movements that are friendly and natural.” (Guizzo:2012:122)

Looking at the designs of soft robotics, the majority have a clear inspiration from nature, especially soft bodied animals. The technology makes it possible in higher extent to mimic muscular structure, which improves the robot’s ability to change and adjust to different work task. Previously, the structure of robots have been inspired by the architecture of skeletons, now the focus has shifted to muscular construction, a change that have made the robots more lifelike due to the fact that the human body only consist of 11 per cent skeleton. However animals seems to be the main source of inspiration especially the caterpillar and octopus, which both are completely soft bodied, but moves very differently due to their muscular constructions. While these animals have already been imitated with great success, they are limited in size as a bigger soft bodied robot would break under its own weight. 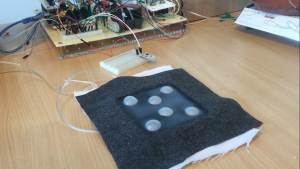 So far, the use of these new robotics are greatly explored within the medical area, predicted to serve as a tool for both patients, surgeons and even as rescuers as their soft composition makes them safer to interact with humans. Soft robotics furthermore have the advantage of being resistant to pressure and can deform under changing environments. These qualities creates possibilities within the military section as they are potentially able to overcome dangerous obstacles that stiff linked robots would not, and furthermore be able to quickly adapt to different scenarios.

Soft robotics and the required technology is often contradicting each other as the research within “soft” components is still a work in progress. However, textiles has according to Milwich et al. in their article ‘Fibrous Materials and Textiles for Soft Robotics’ (2015) shown to be useful to solve some of the issues, like adding robustness, tear resistance and even structuring the movement of the air muscles. Textiles can due to their properties and uses in our everyday lives “ increase the acceptance of robots in human surroundings” as a textile can work as a “pleasant wearable.” (Milwich, 2015) Existing textile manufacturing techniques within weaving and braiding provides excellent strengthening fiber systems while embroidery has been developed within intelligent textiles as conductors. 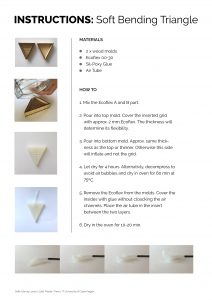 These techniques is just like other bio inspired soft robotic systems found in nature where organisms are composed of fibres. Newer techniques also involves 3D weaving, which allows a third fiber system in the height of the material and can, amongst other things, be used to transport fluids, which opens up for the opportunity to discover within soft robotics powered by pressured fluids or possibly even air. Then of course there is the latest experiments with 3D printed textiles just as well as laser cutted textiles has become more common to see not only in research, but as an aesthetic effect who have reached the stores. This variety shows that the field of soft robotics and intelligent textiles might have more in common than one might think, as they already share some technologies and there possibly awaits much more convergence  be discovered within their respective fields of research.

This thesis focused on exploring new material possibilities within the existing fields of intelligent textiles and soft robotics using a bottom-up approach within a parallel-developed conceptual framework. Using air as both a technology and as a conceptual framework, it allowed the thesis to investigate the chosen research question within an explorative and poetic framework placed outside the marketplace by using design theory of critical and speculative design.

Mainly placing itself in the overlapping iterative process of the design funnel’s elaborative and reductive phases several prototypes were produced to conduct the material possibilities, showing that the two fields of research indeed can benefit from the properties of each other in a material combination. Textiles offers a variety of appearances which cancontribute with properties not found in the Ecoflex such as strength and tear resistance besides also opening up for vast visual possibilities within look & feel. At the same time the textile affords the ‘perceptual bridge’ for the audience by referring to use and techniques found in everyday life, which allows the artefact to integrate the less known material Ecoflex, and furthermore wander into fictional realities or alternative ideologies (Auger:2013). The soft robotic material Ecoflex, offers the possibility to create lifelike movements by using air as an technology to form and shape the silicone. While this is already known from existing bio-inspired pieces of soft bodied animals, statements from participants in this research furthermore showed that the lifelike movements also are possible to experience as an extension of the human body. By simplifying the casting methods of soft robotics, using pre shaped moulds as well as laser-cutted wood, this project opens up for the possibility to expand the field of research to not only concern a group of experts within engineering and robots, which are needed to extend the field of innovation. 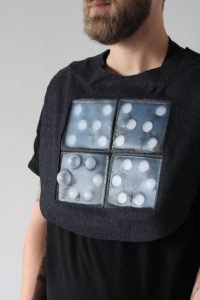 The Prototype in action

Following the material exploration this process shows the maturing of a speculative design artefact, a process where the material objective of the project to a great extent were met, however the final integrated prototype Archê is still in its infancy. To successfully constitute itself as an intelligent textile the work within the implementation process has to be further conducted. At this stage the prototype is in the closets form to an electronic textile (Berzowska:2005) that allows computing on the body. This is, besides being a reflection of personal limited technical abilities within intelligent textiles, additionally an expression of the needed research within the field of soft computation that would benefit the innovation within soft robotics and intelligent textiles individually as well as in combination of each other. Finally, the thesis explored how this new use of materials could be used to encourage a relationship between humans and the environment. By interconnecting the humans with their own barely perceptible contribution to aerial formations caused by respiration, Archê is a mediator for the medium air, a focus that according to Tim Ingold is needed to immerse people in the environment. This mediation is conceptual and is in that sense more environmental-interconnected than it is user-centered. Further research could be done to determine the level of relationship Archê succeeds to establish, but the conceptual research as well as feedback showed great potential in developing this conceptual path.