Below you will find a selection of available projects in the REAL group. Most topics can be the basis for a Master’s project, a Bachelor’s project and even a self-study project.

These projects are related to our currently running E.U. project EVOBLISS. The overarching goal for ITU, in this project, is to make a robotic liquid handling robot able to automate chemical experiments. Currently, a Ph.D. student and a post doc are busy building the machine. Read more about EVOBLISS here. 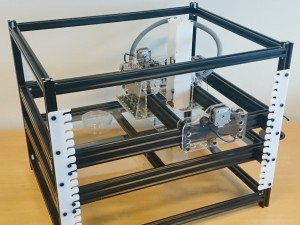 Currently, soft robots are made pouring silicone into molds and gluing several layers of cured silicone. This is a complex process that requires several steps. In this project, the student will analyze the feasibility of employing 3d printing methods to build soft robots. The EvoBot robot will be used to add liquid droplets in a vessel with uncured silicone. Once, cured the liquids will be poured out and create the cavities inside the cured silicone.

For running chemical experiments with EvoBot, it would be a useful feature to simulate the robots movement before actually running the experiment on the robot. This would allow for offline development of experiments and a means to verify that a program does not damage the robot.

Integration of PH sensors into the robot

You will integrate a pH probe with ARDUINO to measure the pH of liquid in a reaction vessel. Further, the probe should be integrated with the robot firmware and programming API. Potentially you may use thingspeak.com to monitor the real time data online.

An evolutionary algorithm based system to reproduce images with droplets

Given a photo, say Mona Lisa, you should evolve a droplet pattern that is as close a representation of Mona Lisa as possible. The pattern will be printed by the robot, the pattern will then be captured by a camera, and finally the result can be compared to the original and a fitness value can be assigned. You can then employ an evolutionary algorithm to optimize the result over generations.

Previously completed projects under this topic:

A Vision-Based Liquid Handling Robot for Automation of Chemical Experiments

An Automatic System for Handling of Petri dishes.

In this E.U. funded project, we are currently investigating the potential of combining plants with robot technology in order to control the growth of plants so they can grow into architectural meaningful structures.

The idea here is to have a group of simple mobile robots on the floor each carrying cables attached to the ceiling. They then coordinate their movement with respect to each other to weave a structure above them. The task here is to develop the controllers for the ground robots starting from very simple approach moving to more powerful implementations as the project progresses. Thoughts can also be given on how to weave growing plants with artificial material.

Is it possible to exploit plants as a sensor and actuator system for collection of solar energy. Some plants are able to rotate to track the path of the sun over the sky during the day. A notable example is the sunflower. This project is a preliminary investigation of bio-robot hybrid systems. In the project we will make a small robot including an actuator and a solar panel able to harvest as much solar energy as possible. We will extend this system with a sensor for measuring the orientation of the plant and use this as the input for control. Finally, we will attempt to use the movement of the plant to control the position and orientation of the solar panel. We will compare three approaches in terms of efficiency.

Investigate how procedural content generation can be used to generate various robotic structures, how these morphologies can explain biological development or how generated morphologies could potentially be useful for appliance in robotics. You may use a simulation environment of your choice.

The aim of this project is to automatically build robots using an open source 3D printer. 3D printers are usually used to build parts of the robots, the autonomous fabrication of robots is still a challenge. The project seeks to address this issue by using a modular construction system. First, a standardized set of components (battery, electronic board, motors and sensors) will be designed as a basis parts for building robots. These parts will be designed employing 3D printed parts and open source tools. Afterwards, we will design some different robots which can be assembled. To this end, a 3D printer will be modified to assembly these modules automatically using a specific gripper head. This project will cover mechanical design, electronics and the software framework to represent morphologies of the robots and generate the commands for the printer.

This project aims to automatically build small structures using robots. To this end, we will explore two different approaches. On one hand, we will employ strings or fabrics to build tensile structures such as tents or bridges. On the other hand, we will study how to employ magnetic bars to build grid-shells structures like geodesic domes. Both approaches employ lightweight materials suitable to be carried by small robots. The project will adapt and modularize the construction elements for easy and quick deployment of the structures and built-in sensors will provide feedback to the robots about the state of the structure. We will use predefined designs for the shape of the structures and we will study how to coordinate the team of robots to carry out the construction. The mechanical design of the robots can be realized using LEGO or Locokit systems with some custom parts.

Coevolution of morphology and control for heterogeneous modular robots.

This project will extend an open source robotics simulator, such as Gazebo, to evaluate the fitness of modular robots for different tasks like locomotion or manipulation. The simulator must be accurate and, for example, it should detect collisions between modules and it should calculate the holding forces between two connected modules. The modular robot system will be based on a heterogeneous modular architecture with different types of modules (rotational, slider, etc.) and we will model these modules in the simulator. Afterwards, we will automatically obtain the morphology of the robot and its control parameters for different tasks using coevolution. Specifically, we will study the influence of different parameters in the coevolution process such as codification, control of the modules, discrete space or heterogeneity. For example, we will coevolve the morphology of the robots using different subsets of types of modules to study the influence of the heterogeneity in the evolution. In addition, extremely simple modules might be built to study the transfer from simulation to reality. See some previous work results here and here.

A controller for an underwater robot 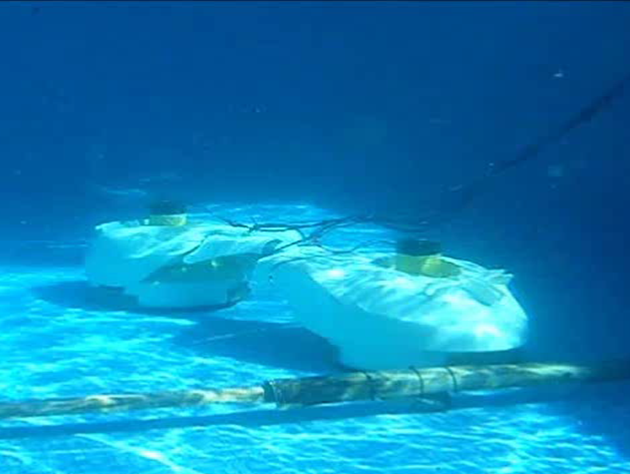 A underwater robot for hull cleaning.

We and colleagues in Spain made the above robot for cleaning the hulls of boats. The objective of the project is to design a controller that cleans the hull of the boat and at the same time avoids all the obstacles. The controller would be a similar to the strategy used in a Roomba robot, which cleans your flat: avoid obstacles and try to cover all the surface. But the surfaces of hulls are much more complex! They are not flat, they have a lot of different obstacles and they could have different areas where you can only access by employing complex maneuvers.

Create your own simulated robot and apply various evolutionary computations and/or AI to it to evolve specific robot behaviors. You will use a robotics simulator such as Gazebo or V-REP and investigate what kind of optimization strategies can be applied to acquire specific behavior for your robot. You may also skip the simulation part and create a robot that just implements evolved behaviors or adapts its behavior via online evolutionary strategies. See a video from my own master’s thesis.

Many programming languages exist for describing geometry e.g. openGL, Java3D, etc.. However, few languages consider the actual challenge of turning a given 3d geometry into a working piece of mechanics. E.g. for two parts to fit a given tolerance has to be specified. However, no language supports this. This project then is to consider the extension of geometric programming languages to include fabrication relevant features.